With this week’s topic “Be kind. Everyone has a hard fight ahead of them”.

Yep, I took a week off

And I bet you didn’t even notice!  OK, maybe you did…at any rate, sorry if you missed me.  Last week I was on the set of Regaining Innocence, so early call times and long days.  OK, maybe not a week OFF exactly, but a week off writing the blog. Well worth it though, and I will write more about it in a couple months when it is close to being released.  If you follow the link above, you’ll see some behind the scenes pics of a fantastic cast & crew at work. 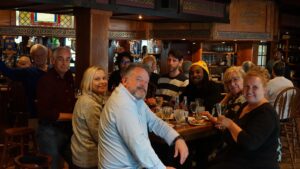 As I’ve mentioned, the topics in this series come from a list of “advice” I saw on Facebook, and we are coming up on the end of the list (so now I’ll have to find my own topics).  Anyway, this saying is often attributed to Plato or some other ancient philosopher, but it is MUCH more recent than that.  This one actually traces back to a Scottish Author writing under the name of Ian McLaren in the late 1800’s.

It’s no wonder this often gets attributed so far back, as the message it sends it timeless.  It is certainly as pertinent today as it was in the 19th century and would have been all the way back to the beginning of recorded time.  Life is not easy, and everyone is struggling with SOMETHING.

Being kind, especially in the face of some adversity or confrontation (which is kind of alluded to in the quote), is pretty difficult. People can be judgmental and cruel, and our natural inclination is to respond in kind (well, mine is anyway).  What this quote reminds us of is that each of us is struggling to move forward in life. We have no idea why a person may be angry or unkind.  It’s our response to that behavior that’s being addressed here.

It’s part of the human condition to have struggles at times.  We lose loved ones to illness and death, we lose our pets, our lover decides to leave us, our jobs are stressful, our cars break down…there is an endless list of things we deal with from day to day.  Everyone.

Most people don’t wear their troubles on their sleeves, so you just have no idea (usually) what trouble may be causing them to act in an unkind way.  To respond unkindly only serves to make their problems that much worse.  For all you know that short tempered “Karen” (sorry to all the people named Karen out there…I didn’t come up with the meme, but it works as an illustration) who is demanding to speak to the manager may have just gotten some really terrible news. Give her a break!

Empathy and Curiosity are the key

When confronted with a rude or angry person, taking a minute to try and put yourself in their shoes will go a long way to helping you respond kindly.  Ask yourself a couple questions to see if you can understand:

These are just examples, but you get the idea.  Try and put yourself in their position and understand WHY they are acting the way they are.

Remember times in your life when you were short, grumpy, or angry with people because of some event unrelated to them.  If they respond to you angrily, how did it make you feel, better or worse?  How did a kind response make you feel?  I venture to say the angry response elevated your anger, and the kind response made you feel a little better.  How would you want someone to respond?  Act that way!

And by “entertainment industry” I mean everything from voice artists, to actors, to producers, directors, cinematographers, grips and on down the line.  Why is it important to be kind?  I may have mentioned once or twice that this industry is built on relationships.  Being the person who always responds unkindly is not going to ingratiate you to the people you are working with, and it is LIKELY to ensure you don’t get as much work as you’d like.

No, there is no ACTUAL blacklist

Well, there is an actual show called that, but I digress.  I mean, there is not a list that gets shared around the industry of people to not work with (well, not since McCarthy in the 50’s anyway).  But for negativity, there is a pretty long memory.  Most of us can name a few celebrities who have a bad reputation, and casting professionals and production teams all read the news as well.  You don’t want to be that person.

An example from one of my productions

I was on set as a background actor.  As we were getting set for the scene, I was stationed in a hallway behind one of the principal actors (a “named” actor), when he turned to me and rudely said “Back up!  No, around the corner, I go on “action”.  I hadn’t said or done anything to this actor, I wasn’t invading his space or interfering with him in any way.  And of course, I was background so I was set to begin moving just BEFORE he was so in actuality, he should have been behind me.

How did I want to react?

I definitely had some colorful words I wanted to use.  Of course, using them would likely have gotten me removed from set, and thankfully there was a PA close by who got me and calmed me down before I said anything…but I really wanted to point out to this person that we were both working together, albeit in wildly different roles, to make the production the best it could be.

So, I asked myself

Why is this guy acting this way?  I decided it was one of two things:  Either he was just an arrogant, full of himself windbag who couldn’t stand being to close to “the help”, or he was a method actor who was trying to stay in character (his character was a bit of a butthead).  Either way, there was nothing I was going to do to change it or not make things worse.  I decided to believe he was just being in character and let it go.  I later found out from a fellow BG actor that he worked with him during a much happier scene and he was friendly and jovial…so I guess I was right.

But here’s the thing

As satisfying as it may have been to tell this guy off, it would have hurt me a lot more than him to make a scene (other than the scene we were TRYING to make).  I would have been asked to leave AND would have gotten the attention of the director and the rest of the crew…and not the kind of attention I wanted to have.

It makes YOU a better person!

The real damage to being unkind is to yourself.  Even when faced with someone who is being UNkind, responding kindly makes you a better person. It helps you to learn empathy and to recognize that people are not generally unkind, but are acting that way, usually, because of something going on in their life you may not be aware of.   And it doesn’t paint you as “THAT GUY” who is difficult to work with.

But it doesn’t mean…

Being kind doesn’t suggest that you condone bad behavior.  It doesn’t mean you overlook or are just OK with anything someone throws at you.  Being kind does not make you a doormat for people to just walk on.  It simply means when you DO take a stand and respond to negativity, you do it from a place of understanding and respond in a kind manner, even when disagreeing or chastising.  Sometimes you just don’t know what is going on with them or what terrible thing may have just happened that makes them act that way.

Remember to always “Be Kind.  Everyone has a hard fight ahead of them” (even you!).