With this week’s topic “Give credit. Take blame”.

This week’s topic seems like a real no brainer (well, to me anyway).  This is especially true if you are in a position of leadership within a team or organization.  Not only in your work life, but your personal life as well.

What I’m NOT talking about

I’m not suggesting you take the fall for someone who commits a crime or does something dastardly.  My suggestion is not to perpetually “fall on your sword” to make yourself look good.  I’m not talking about becoming a martyr.

It’s not JUST a good idea

This concept, if you really think about it, isn’t just a “feel good” good idea either.  It’s reality.  In every example I can think of the failure of a team can be directly attributed to some failure of that team’s leadership. 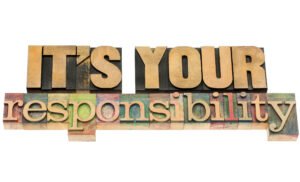 This concept is played out in the extreme within the Navy: The Captain of the ship is always ultimately responsible for anything that goes wrong.  If you pay attention to these things, you routinely see Commanding Officers relieved of duty when something goes awry.

In 2017 the Navy experienced two pretty serious collisions at sea.  In each case, a navy ship collided with a commercial vessel in a crowded sea lane causing (in one case) serious loss of life and in both cases heavy and expensive damage to both vessels.  In neither case was the commanding officer on the bridge, therefore a failure in his personal judgement was not the cause.  In both cases, the CO was relieved of duty for a failure of leadership.

In both of these cases the CO was responsible for the safe navigation of his ship.  In both cases he delegated the authority of piloting the vessel to junior officers who were standing bridge watches.  In both cases there was further delegation to watch standers who were assisting the bridge officer by being lookouts and manning electronic surveillance as well as operating the (admittedly) complex systems that controlled the ships navigation system.  In each case there was a lapse in judgement or reduced familiarity with the systems/equipment that COULD have been corrected with the proper training.  The CO was responsible to make sure everyone was properly trained.  They weren’t

I am intentionally not mentioning names and am dramatically oversimplifying the circumstances and events.  This is not about the details of what happened or who might have been at fault.  I mention these horrific accidents to highlight the fact that in each case the CO could have, and arguably SHOULD have, taken actions before the accidents that may have prevented them.  It is to highlight that he takes the blame because, ultimately, he was responsible.

I understand these are extreme examples, and most people will never be in a situation like the ones above.   These examples, however, illustrate that in all cases the leader of a team or organization is not TAKING blame, the blame actually rests with them.

The problem is, we are people.  And people are inherently averse to taking blame for things that go wrong when there are other people around that can be blamed.  Again, just turn to the news for examples of losing football teams pinning it on linemen, or a corporate CEO blaming their subordinates.  Whenever something goes wrong, there is generally enough finger pointing for everyone.

Let’s face it.  If you’ve ever been the scapegoat for something, you know that many (if not most) people don’t actually accept blame very easily.  Sometimes, people work very hard to deflect blame.  Accepting the blame for something you did not personally do, even if you are the responsible party, is very difficult, yet, it is important to do so.

This is another area that seems to be tough for people.  If accepting blame is important, why NOT take credit as well when it goes right?  Just as it is important to take blame, it is equally important to give credit.

Everyone knows what a team is, right?  If not, click the link to get the definition, although it may not be as illustrative as you’d like.  The definition I am discussing falls under the category of “a number of persons associated in some joint action”.  This is a very broad definition, and could mean anything from a sports team, to a project team, to a band to a family. Any group of people (ostensibly) moving toward a common goal.

While it is easy to see that acting is a team sport (even if it is a one man play), VO is ALSO a team sport.  The actor (for the sake of this discussion actor can mean screen/stage or voice acting) is just one part of a larger team.  On stage and screen, there is a producer, director, camera operator, sound mixer…and a multitude of other crew members.  For VO there is the actor, and while they are typically not directly involved with the talent, a producer, director, creative director etc.  You get the point…nearly everything we do as an actor is as part of a team.

And the academy award goes to…

Notice that most actors who win an award give an acceptance speech that thanks half the planet.  The reason is they recognize they are part of a team and they are not getting this award all by themselves.

WHY is it important

So now we get to the meat of the matter.  Why is it important to take blame and give credit?  There are subtle and not so subtle reasons.

In this industry we are counseled to “make bold choices” …although there is a bit of dissension about that…when a director (for example) takes the blame when a production is a flop, it empowers their team to continue to take risks and make “bold choices”.  Many, many fantastic roles would not happen if actors did not feel safe in making those choices.  It empowers actors to be the best they can be.

It’s not about individual glory

You may be the lead in a production, and you may have had a standout performance…but acting is a team effort.  Anyone who has ever been involved in any kind of production knows it takes a huge team to put it together.  Without them, your stand out performance would never bee seen, or recognized.  Yeah, you should accept the award…but make sure you let everyone know you didn’t do this on your own, and it was the TEAM that had made a stellar product!

Maybe not so obvious but taking blame and giving credit shows your integrity.  As I’ve mentioned before (here and here to name just two) this industry is almost more about relationships than talent (ALMOST).  Having integrity, and having people notice that, makes you easier to work with.  No one is going to want to work with someone who blames a bad performance on their scene partner, or a flop movie on the rest of the cast and crew.

Show you have integrity

From now on, before you point the finger at someone (unless you are identifying them in a lineup), think about your role.  Never throw your team mates under the bus.  An old friend used to say “When you point one finger at someone else, you are pointing three at yourself”.  Be a good leader or team member; ALWAYS Take Blame and Give Credit.

Also, check out this New Year Non-Fiction giveaway. This promotion ends January 31st. Please feel free to share this link with anyone of your contacts!