For those of you who notice things, you’ll notice I have been silent for the last couple weeks.  Yep, had a couple REALLY busy on camera (and away from my desk) weeks as well as completing a stand up comedy class (See my routine here) followed immediately by a need to head to Utah to help my mother-in-law move into a retirement home.  It’s been crazy, but I am back and ready to go!

This week we continue the series with “If you choose to go in drag, don’t sell yourself short!”

So what is “Going in drag”? 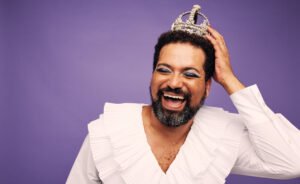 Simply wearing clothing of the opposite gender would not constitute “Drag”.  So wearing your wife’s panties doesn’t qualify…I mean, it qualifies as cross dressing just not going in drag.  From my research, going in drag includes putting on the persona of the gender you are dressing as, typically exaggerating gender signifiers and gender roles most often for entertainment purposes.

Just to be clear, while I understand there are a number of genders beyond male and female, when speaking of drag in this blog, I am going to focus only on the two “birth assigned” genders of male and female.  Not to slight anyone or leave them out…just that for the purposes of this blog the totality of genders people identify with are irrelevant.  You’ll see why later.

I’ll tell you why now.  While this blog purports to be about going in drag, it’s REALLY about not selling yourself short no matter what you choose to do.

No matter what you decide to do, do it all the way…don’t sell yourself short!

What does sell yourself short mean?

Well, according to the Free Dictionary by Farlex, selling yourself short is:

Selling yourself short relates to a syndrome most people in the entertainment industry are familiar with:  The Impostor Syndrome.   According to Psychology Today, people who experience impostor syndrome are people who “…believe that they are undeserving of their achievements and the high esteem in which they are, in fact, generally held. They feel that they aren’t as competent or intelligent as others might think—and that soon enough, people will discover the truth about them.”

But don’t be arrogant!

I mean, nobody likes someone who is too full of themselves, right?  Right, but I’m not talking about arrogance here.  Definitely don’t be arrogant.  I’m talking about not knowing and understanding your own talent and abilities. Many people feel they are not as talented as others suggest they are and are just WAITING to be found out.  I know for sure I’ve felt that way myself!

How does this hurt us?

As performers, both in Voice Over/Voice Acting and stage/screen acting, selling yourself short hurts us in several ways.  First, when deciding whether or not to submit for a job we may think “I’m not good enough to be selected, so why waste my time?” and then not submit to (potentially) the gig that will be the turning point in your career!  Second, your lower esteem for yourself will come through in your audition performance.  Believing you are not “good enough” means you are far less likely to take chances and make bold choice.

Listen, the truth is you are likely more talented than you think you are.  It’s really that simple.  We ARE our own worst critics after all.  Have a bold idea for an audition but feel like you don’t have the chops to pull it off?  DO IT!  Maybe you do, maybe you don’t…but you’ll never know until you try.  And if you don’t?  Practice.  KEEP practicing till you do…maybe not for this audition, but for the next, or the next…ad infinitum.

Do you think you know what the casting director is looking for?  Here’s a newsflash for you – Many times they don’t know until they hear (or see) you do it.  So do it the way YOU see or hear it.  I’m not suggesting you completely ignore the CD’s directions, hardly.  But you almost always have a chance to give more than one take.  Do one according to directions, then play around and give them your best interpretation of the script.  You may be surprised.

You’ve likely heard this before, and it is no less true in the performing arts.  Bring you’re A game and give the CD your best interpretation of the character/script.  You may not book that one, but it could lead to other gigs.  I personally have auditioned, not been cast in the part I auditioned for but they liked my performance enough to actually write in a character for me.

Several times in my short career, I’ve given a performance that was NOT what the CD asked for, but they came to realize my interpretation was better than theirs.  Not all the time, sometimes they just cast someone else and move on…but a few times, I see the lightbulb come on.  The truth is, you have as much chance of booking a gig either way, but if you make bold choices and commit to them, you are being true to yourself, and you will book more often that way. As has been said (but no one really knows by whom although it is most often attributed to Oscar Wilde): Be yourself, everyone else is already taken.

Stop selling yourself short.  You are inevitably better than you think you are, and when someone tells you that you’ve given a good performance, or you are a good voice actor or a good actor – or a good ANYthing for that matter…believe them.

Whatever you choose, choose it and fully commit to it.  If you choose to go in drag, don’t sell yourself short!